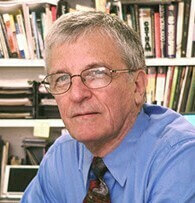 Michael Dennis has been both an academic and a practicing professional for over forty years. He is an authority on urban design and the development and form of the American campus. The firm's work has been directly influenced by his extensive experience in teaching and research. This interrelationship between theory and practice informs the firm's process, approach, and beliefs.

Michael has lectured widely, and is the author of Court and Garden: From the French Hôtel to the City of Modern Architecture (MIT Press, 1986), a study of the evolution of the modern conception of space, exemplified by the parallel transformations of the French urban residential building type and of French urban design strategies, as the pre-modern predominance of the public realm was supplanted by the modern predominance of the private realm. Michael is currently working on another publication, Temples and Towns: A Study of the Form, Elements, and Principles of Planned Towns, expected to be released in 2015. In 2011 Michael was awarded the prestigious CNU Athena Medal for his contributions to urbanism.