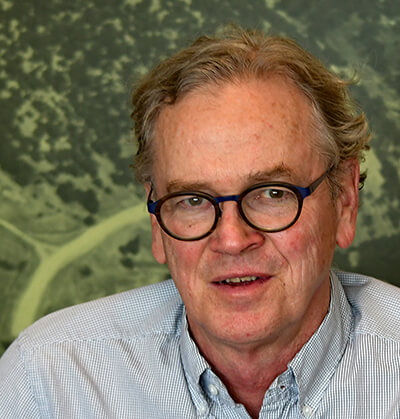 Professor Wilson joined the faculty in the Spring, 2022 semester to teach History of American Architecture. Wilson has had a distinguished 40-year career as a writer, educator and preservation consultant, including heritage tourism planning, cultural resource surveys, and National Register nominations for over 1400 historic properties.

He is author of such award-winning books as Facing Southwest: The Houses and Life of John Gaw Meem (2001) and The Myth of Santa Fe: Creating a Modern Regional Tradition (1997); co-author of The Plazas of New Mexico (2011) and La Tierra Amarilla: Its History, Architecture and Cultural Landscape (1992); and co-editor of Drawn to Landscape: The Pioneering Work of J. B. Jackson (2015) and Everyday American: Cultural Landscape Studies After J. B. Jackson (2003).

His essay, “The Modern Regionalism of John Gaw Meem,” appeared in the second issue of The School of Architecture’s journal, ANTA, Spring, 2022.

Previously, at the University of New Mexico in Albuquerque, he was the founding director of the six-course Graduate Certificate in Preservation and Regionalism, where he continues as Regents Professor of Landscape Architecture, Emeritus.

Wilson has also served as president of the Vernacular Architecture Forum, an international organization focused on the study and preservation of everyday buildings and cultural landscapes.

Born in Iowa City, Wilson received a BA in Philosophy and Psychology at Yale University and an MA in Art History (with an emphasis on Architectural History) from the University of New Mexico.